Sometimes ignored compared to the saddle and handlebars, the foot-shoe-pedal interface is critical to enjoying an efficient, powerful riding position. Manufacturers are well aware of this and strive to provide stiff-soled shoes and rigid pedal platforms to maximise energy transfer from muscles to forward motion. The efficiency in this mechanism is dependent upon minimising wasted motion and by ensuring the numerous bones and muscles in each foot remain firmly planted and stable. As the foot is stable so the knee and hip alignment remains stable. The foot-Pedal interface is also critical to cycling comfort, with the shoes, insoles, cleats and pedals all being key players.

The key factors controlling foot stability and comfort are as follows:- 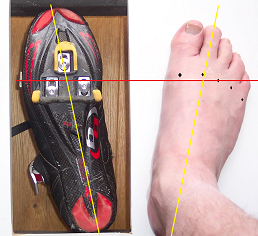 Foot Rotation (toe in or toe out)

Foot rotational posture will have a nominal position and be coupled with hip, ankle and knee joint movement. In fact, the foot is often regarded as a dial indicator for the automatic (i.e. involuntary) rotations of the lower limb. Rotation during the pedal stroke is normally accommodated by the amount of float between cleats and pedals. This is fine provided the maximum rotation does not exceed the total float, and more importantly that the cleat accommodates the nominal position and does not 'bottom out' during the pedal stroke. The angular rotation of the foot will also define the lateral spacing of the cleats. Cycling publications often talk of Q angles when discussing pedal to pedal spacing (Q actually stands for quadriceps angle and is related to the angle formed between the shafts of the femur and tibia). As most of us ride on bikes with standard bottom brackets and components, we don't have very much adjustability here other than a small amount within the cleat. For those of us with excessive toe out we need to use this (and even additional washers, longer spindles or pedal spacers) to prevent heel strike against the crank arms.

Establish your foot angle by observing them whilst walking, standing up straight and dangling your feet over the side of a table. There will be differences between the three but the fundamental toe in or out should be apparent. Replicate this angle by flipping the shoe over and matching the angle in the opposite direction. The cleat should point straight ahead.

When standing or walking, both the heel and forefoot are utilised. When riding, most sensible people apply forces to the pedals through the fore-foot. The angle of the fore-foot with respect to the lower leg is called either varus (big toe up) or valgus (big toe down). Given the forces applied via the fore-foot to a flat insole / pedal platform, one could imagine how a large valgus or varus angle will result in the application of a moment to the lower leg, manifesting as a lateral displacement of the knee as the load varies around the pedal stroke. A strong angle in either direction will also tend to increase pressure under the lower part of the foot. Most people have a small varus angle with around 5% valgus.

One means to correct this is to place a stiff wedge beneath the insole or between the cleat and shoe plate. Specialized shoes (Body Geometry) and some others have a small varus tilt built in to the sole. At BikeDynamics we can measure the fore-foot angles and in conjunction with dynamic assessment recommend the angle and direction of wedges that should suit you best.

The recommended foot position over the pedal spindle is almost universally acknowledged as the ball of the foot. The ball is one of the three "rockers" of the foot, along with the heel and big toe. It is at the end of the body's only first-class lever, and is ideally placed to be both a powerful and stable point to apply pressure to the pedal. The "ball" could be regarded as quite a large area though, so we need to be a little more precise in defining exactly what we mean by it.

As a rule, there is often little downside to the cleats being too far back. Being forwards encourages a 'toe down' posture and can give toe numbness and 'Hotfoot'.

The diagram (from "Understanding Joints" by Bernard Kingston) shows the many bones of the foot. The "ball" is regarded as the area at the distal end of the five metatarsal bones. For cycling we need to use a horizontal line, so choose a best fit through the first four. In the diagram shown, the horizontal alignment of the first three is very good but in the real world this is not always the case, the second often being the longest. The position of the first metatarsal is fairly easy, being the bony bump on the side of the foot by the big toe. The rest often reveal themselves when the toes are flexed. 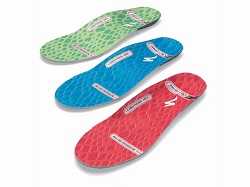 The effects of either over-pronation or over-supination during walking and running are reasonably well understood. This is where foot posture causes the load path from heelstrike to toe-off to take either an inward (pronation) or outward (supination) route. This is associated with flat-footedness or high arches respectively. The implications to cycling are less clear as peak forces are lower and always applied to the fore foot. A potentially poor scenario is to have high arches that collapse under the applied loads. This would result in a fluctuating lateral knee movement similar to that due to high forefoot varus angles.

Fortunately cycling shoe manufacturers now recognise this and offer shoes and insoles with varying levels of arch support. Increased arch support can serve two separate functions. For those with weak insteps, more supportive insoles will prevent the arch collapsing and the ankles rolling in. For those with high, stable arches, insoles can help to cushion the foot, reducing pressures and the propensity for 'hotfoot' or other discomforts. Over-supporting the insteps can push the knees outboard and create discomfort under the arches, so more support is not always best!

Many people show a strong coupling between the angle of their ankle (between foot and tibia) and the inversion or eversion of the foot. This tends to be seen as an outward rotation of the foot (inversion or big toe up) as the angle tightens (dorsiflexion). Some people also show high levels of dorsiflexion as the leg comes over the top of the powerstoke and load is applied. This has a very similar characteristic to a varus forefoot in that the knee will sway in towards the frame. One countermeasure here is to stiffen the ankle or even push down with the toe (plantarflexion) to prevent the ankle angle tightening. This dorsiflexion may be a result of a lack of arch support. As the arch drops, the plantar fascia (connective tissue between heel and toes) effectively lengthens, allowing the toes to lift relative to the ankle. 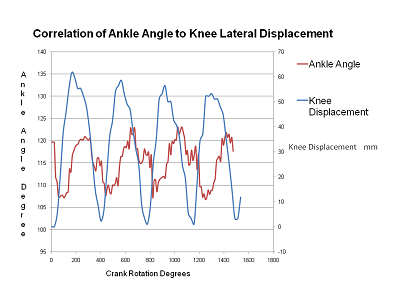 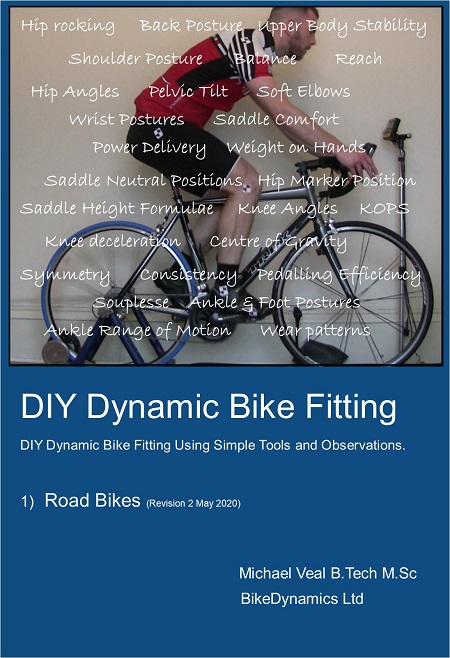